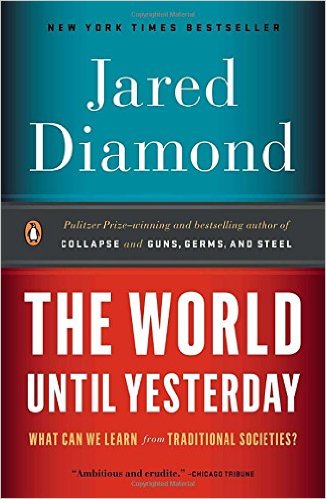 I bought this book with a gift certificate at a small bookstore where there was little other choice. Actually, now that I think of it, it was at a large franchise bookstore where the corporate office knows they can make more money on Chinese home decor knickknacks than they can on books. I expect in a year or two, such stores will be indistinguishable from airport duty free shops and the only literature available to buy will be ebooks from vending machines.

I’ve been a fan of pop anthropology since the ’70s, when Marvin Harris’s “Cows, Pigs, Wars and Witches” came out. I am generally omnivorous when it comes to well-written words between two covers. But I hold a special regard for books on the origin of humans and the understanding of their behaviours. So I was really looking forward to reading this Diamond book, which is subtitled, “What Can We Learn from Traditional Societies?”.

He begins with sections on war and territoriality, how everything in the lives of hunter-gatherers and early farmers was local and foreigners with their own completely distinct language and culture were often only a few miles away. Much of this I found tedious, as it smacked of an introductory anthropology course. Facts were delivered, information conveyed, but there was very little in the way of digestion. What I mean is, he failed to draw any lines between then and now. It wasn’t so much, How Did We Get Here? as Here’s What They Did.

By the time he arrived at the chapters on child-rearing, language, religion and diet, it was clear he had no deep thoughts on the subjects he was presenting. His only leap into the modern world turned out to be mildly prescriptive. Here’s what you can learn, he told us. I don’t care to be lectured on the benefits of eating less sugar and salt when what I got into this hefty tome for was a better understanding of the human animal.

The book began to feel like one of Isaac Asimov’s science primers, which he wrote it to teach himself the subject matter. Granted, there were wonderful tidbits here and there that I had no idea about. But being provided with fresh examples of principles you already understand is no substitute for meaningful engagement with a subject. His theory was absent. He discovered nothing new. He drew no conclusions that a grade six science student couldn’t draw. And in the end, he did nothing more than lull me with his sonorous tone, never once amusing or enlightening.

If you’re looking for ideas, read Arthur Koestler. If you’re looking for entertaining science, read Mary Roach. If you need a good non-fiction yarn, get yourself some Bill Bryson. Diamond’s books are like long, big budget movies where you expect Lawrence of Arabia and you end up with Heaven’s Gate. Save yourself some time and some cash. There are much better books out there.