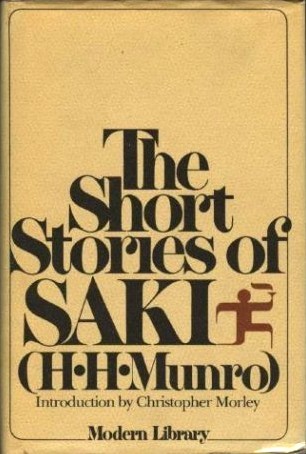 I’ve been rediscovering some of the treasures in my personal library lately. The works of Saki is one of them. I just finished re-reading Saki after a thirty-six year holiday from his nimble-minded wit. In the intervening years I did dabble a bit here and there, reading a story or two to remind myself that the world is bigger than work, babies and mortgages. But now that I have the leisure of setting my own hours, Saki was at the top of my list for re-reading. Actually, that’s not true. Proust was at the top of the list. But he got bumped into the rhubarb for a second time, a hundred pages into Swann’s Way. I have leisure now, not immortality.

Saki, for me, belongs to that world of charming British snoot – full of bon mots, six mile sentences and pre-World War optimism – that was a sort of literary apex from which we’ve been descending for the past hundred years. I didn’t want to finish the book. It ends with a biographical sketch by his sister, and of course counts his death in the trenches of WWI. He and Proust had a lot in common, aunt-wise. And I always want to picture him, a kid of ten, way too smart and mischievous for his own good, having to put up with his grandmother and two squabbling maiden aunts while his father worked overseas.

His stories are like endless appetizers that are so good, you never notice that dinner never arrived. Most are just a couple of pages, easily read just before bed or over breakfast. Many of my favorites are mere conversation pieces where the maiden aunt does the setups and the dandyish nephew the zingers. Some are, plot-wise, works of utter perfection. Every word performing a job of both advancing story and painting scenery, with a satisfying, unexpected twist at the end. Very few in the collection are mediocrities, but there are a handful, forgivable by the better ones.

I love me a good turn of phrase. Shaw, Wilde, Chesterton all those over-read writers who could run rings around most of the rest of us, well, Saki is their court jester, the impish brother who always had a prank, a song or a game to liven things up. I’m sure he did all the pip-pip upper-class British nostril wagging that Monty Python skewered so well. But at heart, he was a great writer, a great humorist and one of the biggest hearted human beings that ever lived. Maybe I’ll read him again before I kick the bucket. I may not be immortal, but some books need no readings, others need three.