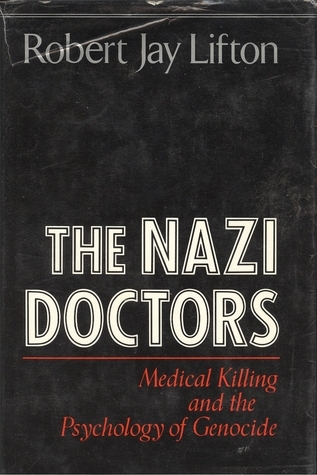 Though I finished this book over a month ago, the savage imagery is still with me, clear as day. Going into it, I knew that facing its subject matter head on was going to be life-changing. I had two big questions at the outset: Were these Nazi doctors just normal people who got sucked into Hitler’s gruesome agenda or were they chosen to work in the death camps because of they were known to be morally twisted? And, were the experiments these doctors did on death camp inmates as horrible as I imagined?

Well, I got my answers. To the first question, it was gratifying to discover the author shared my curiosity. And of course, that made sense. We all want to know if those doctors were aberrations, in which case we, the average joes of the world are safe, or whether they started out as normal people like us and circumstances changed them, which would mean, we are all walking time bombs. My second question about just how grim their experiments were, took over two-thirds the book to answer, as if the author were priming us for the severity of the truth. I admit that was necessary, but it sure wasn’t pleasant. It’s a big book and the writer likes his long compound sentences. So the worry I had at the beginning about the true horrors was made far worse, thinking, those experiments must be a thousand times darker than I imagined for him to prime us this much.

In the end, I was surprised by the truth. Hey, I’d spend a lot of years speculating, and for the truth to be outside all of my myriad scenarios came as a shock. The truth was that the doctors were so varied in their behaviours and choices, the only theme running through their experience is the background of death camp horror.

On the one hand, you had doctors who bluntly told the Nazis they would not work in Auschwitz, they would not select people for the gas chamber, they would not do experiments on inmates, and they were strongly opposed to the idea that any doctor should do that work. You would think these defiant physicians would have been sent to the gas chamber themselves, or at the very least punished by their psycho overlords. But no. The Nazis said, no problem, we understand. And that was that.

On the other hand, there were those who not only quickly adapted to life in Auschwitz, they led the charge in dragging the place down to a lower circle of hell. They set the precedent of standing on the platform for the arriving trains and being the ones who ‘selected’ who would be killed and who would go to work in the camp. They were the ones who volunteered to do research to improve the efficiency of the killing apparatus. They were the ones who recruited younger colleagues, who defined their own extreme experiments on inmates and went farther into the dark side than any ordinary Nazi ever would have. Yeah, doctors. Not poor victims, but leaders.

As for the experiments themselves, well, I imagined a great deal of gratuitous violence. Yes, there was that, but it was always associated with ‘selections’ on the platform or treatment of patients before or after the experiments. Things like beatings and neglect, not outlandish experiments per se. That’s not to say that the experiments themselves weren’t bizarre and inhuman. But they were all ostensibly to further the doctor’s own research in the service of the fatherland’s racial purity agenda.

There were many tidbits of historical information that really set me back in my chair. The fact that it was Americans who were the biggest proponents of population control, though it was the Germans who carried out the Americans’ ideas. The fact that the Nazis kept the death camps secret from their own people. The fact that Jewish doctors worked side-by-side with the Nazi doctors in the death camps.

It was a harrowing read, just as I expected. But it was completely worth it. The rigour and breadth of the author’s research is inspiring. Though it was published in the 80s, it still stands as a landmark work, for the author was able to interview many eye-witnesses, both doctors and inmates, who are now dead. Read it and weep for us as a species.