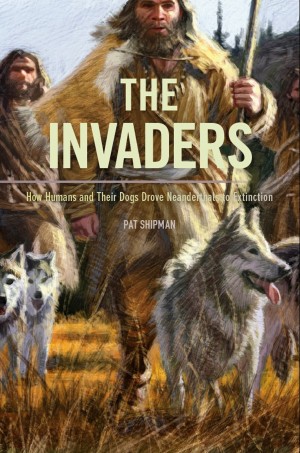 Hearing about a book on humans, dogs and Neanderthals immediately had my attention. And a subtitle that suggested humans and their dogs pushed Neanderthals into extinction made me doubly interested. But did the author deliver on the promise of her premise? Yes and no.

The first three quarters of the book is about humans invading the lands occupied by the last Neanderthals around 40,000 years ago and how the coincident date of the latter’s demise may be significant. Did we kill them off? Maybe, probably, likely, we don’t know for sure. Ugh, I remember thinking, scientists are so annoying. But what about the dogs?

She doesn’t even mention the word dog until three quarters of the way through the book. That’s sort of like introducing the hero of our story during the climax of the tale. And the rest wasn’t even leading up to it!

Finally, I thought, we get to hear about the human/dog team effort that led to killing of the last Neanderthal. But no. We’re right back to the presentation of evidence for and against and great big bunch of maybes, probablies and likelies. And the things I thought she was going to talk about were left out entirely.

Here are a few missed opportunities:

1. If you’re going to talk about human invasions, and in fact, put the word invasion in your title, you better talk about history and not just archaeology. She went on at length about modern humans leaving Africa and spreading out over a world already inhabited by other early humans and wondered and guessed and hesitantly speculated what it might have been like. But she wasn’t going to talk about Europeans colonialism or their outright invasion of the Americas? Heh?

2. Every day one of my friends on Facebook posts a video of some kind of interspecies play. A kitten playing with a duckling. A gorilla with a cat. A dog with a duck. A goose feeding fish. Humans with dogs? Please, this is no big mystery. We like pets. Critters like pets and critters like playing. And don’t get me started on the ubiquity of symbiosis. But any mention of any of this in the book? Nada.

3. Lastly, this book is strictly archaeology and anthropology. You won’t hear a peep about what humans probably thought of Neanderthals or vice versa. But if you gave a psychologist or a sociologist five seconds to provide likely precedent they’d instantly be talking territoriality, sense of ownership and racism. Let me say, we have a pretty good idea what it was like. The author even goes so far as to say that we don’t know if Neanderthals had whites in their eyes. They could have been dark all the way across. Really? Can you imagine the stories told around the campfire of the monsters in the woods? Trust me, we know what it was like when modern humans met Neanderthals. But you won’t find any of this in the book.

In the end, I was happy to hear about the latest archaeological research on the world of humans 40,000 years ago. It was too bad the author didn’t have a better editor, for she repeats herself and page after page feels like a summary of what we’ve already read twice. Ultimately, I was disappointed in the book as it failed to deliver on the promise of its cover.