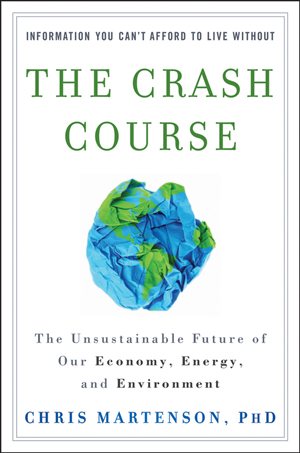 Not finding any science books that piqued my interest at my local purveyor of pocketbooks, I had them order this lovely little tome for me. The first part of it kind of put me off. It was a bit didactic, assuming I hadn’t read any other books, ever, and some really basic terms had to be explained to my little pea brain. When I clued in this was the guy’s first book and he has spent a gazillion hours lecturing to businessmen, I kind of forgave him. I didn’t however forgive his editor.

Anyway, once you get past the patronizing spoonfeeding at the beginning, he launches into a detailed description of the pickle our economy is in and why he thinks it’s on a steep course for a great big adjustment. Kudos for the level of detail. The guy knows what he’s talking about and gives us oodles of reasons why the exponential growth of our public and private debt is unsustainable. He then pitches himself into descriptions of why energy and the environment are on a similar course: from hockey stick peak to a slapshot into the pit. Again, good job and the farther away the first chapters get the better the writing becomes.

Sadly, he kind of messes up in the last chapters in describing scenarios for the next ten years. The section is called Convergence, but he doesn’t really address any of the obvious possibilities for what could happen if a crashing economy, unsufficient or too expensive energy, and environmental disaster all arrive on your doorstep with flowers and chocolates at the same time. For a book that purports to advise investors in the face of a multifront tsunami-level correction of our bloated lifestyle, his best advice is to buy gold, silver, or land. Well, dude, you party with that. I guess it’s better than an End is Nigh sandwich board for all the hobos who used to be stockbrokers.

P.S.
The more I’ve thought about it over the last few weeks, the more I’ve wanted to revisit this little review and point out that overall, it’s an oustanding book. The best comparision I can make is to Kunstler’s The Long Emergency, and not merely for the breadth of subjects it covers, but for it’s clear writing and well supported arguments.

The best and worst thing about The Crash Course is his reliance on the concept of the exponential. Yes, he belabours the definition. But I’m more than willing to forgive him for that because later, he uses the concept as a great big hammer to nail home the severity of the predicaments are we’ve gotten ourselves into. Unlike a ton of other meat and potatoes books on our various crises, I will likely reread this one because it’s 90% meat.