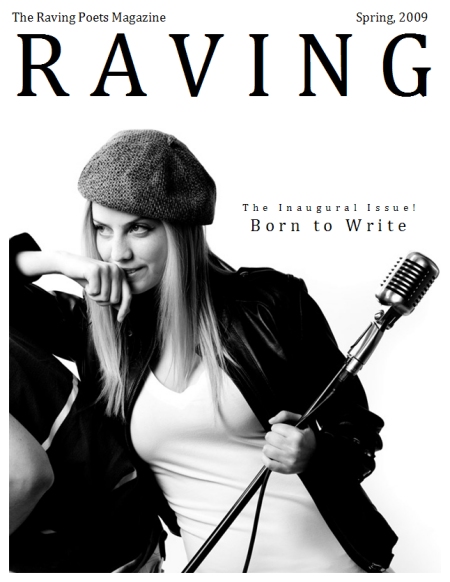 Tonight’s the launch of Raving, my first attempt at pdf magazine. After a dozen muckups in the transfer of doc to pdf, I finally got the dang thing right. I was going to learn InDesign, but after farting around with the program for a few days, decided my time would be better spent actually going with what I know. I tried Publisher next, but that sucked. So I ended up using Paint Shop Pro and MS-Word for the layout. I figured, once it’s in pdf, nobody’s going to give a crap which program I used to create it. Either it’ll suck or it’ll work. And I tried to pound away at it till it I thought it worked.

The magazine content was solicited from the Raving Poets community. It’s twenty four poems, one page per poem/poet. The images are mostly from the RP community as well, though as you’ll see, I did some serious messing around with them.

Anyway, tonight’s the big launch at the Kasbar. The magazine will be online at around 4:00pm today, so check the RP site for that.