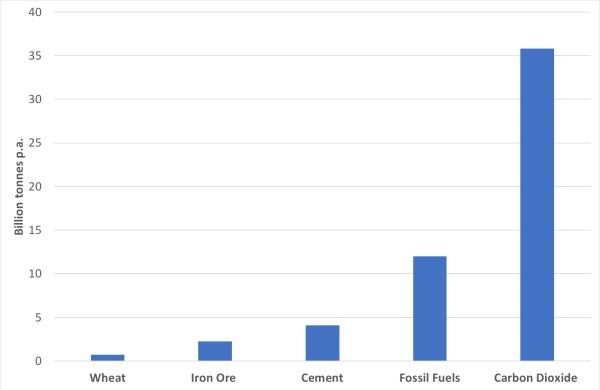 “The mass of fossil fuels produced and consumed each year is huge – about 12 billion tonnes every year, over one and a half tonnes for each person in the world. That is much more than other major commodities. Wheat is less than a billion tonnes per annum, the iron ore for the world’s iron and steel industry is a little over two billion tonnes, and cement is something over four billion tonnes. … However the CO2 produced from energy and industry (so excluding land use), is much greater still – about 36 billion tonnes. … Even capturing and transporting around a third of current emissions would involve dealing with masses as large as the current fossil fuel system, which has required, cumulatively, tens of trillions of dollars of investment over many decades. … The problem gets even worse for any process of CO2 capture from the air that involves use of a solid to bind the CO2. This is because binding CO2 as a solid inevitably involves adding mass. For example, if the CO2 were eventually to end up as limestone (CaCO3) the limestone would have more than double the mass of the captured carbon dioxide.”