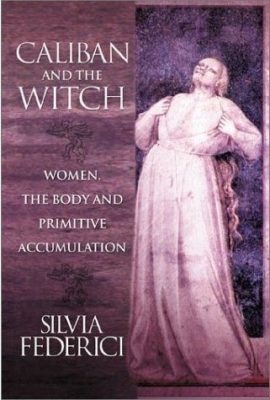 This is really not my sort of book – a Marxist, feminist analysis of the transition from feudalism to capitalism – but my wife was so full of praise for it, I couldn’t wait to read it. And it did not disappoint.

First off, the book is written, probably as a thesis, for those who are familiar with the terms of Marxist views of history. Since she’s writing for that in-group, the Preface and the Introduction are almost unreadable for the layman.

The rest of the book though, is a revelation. (Well, except for the rare occasions when she decides to cover the mic and talk directly to the Marxists in the front row to make sure the in-group is still listening.) When my wife was reading it, and exclaiming over certain passages, I thought, okay, I hope I like it as much as she does. And well… I did.

It’s the story of the heretics, the loss of communal land and the witch hunts in Europe as well as North America. These were absolutely eye-popping to read about. (If I wasn’t a feminist before this, I sure am now.) But what really blew me away was the history of manners, of corralling our sexuality and superstitions, funnelling them into the capitalist straitjacket so that the common man’s thoughts and actions could be predictable. Because, hey, not showing up to work because the moon was in a certain phase was not good for profits.

All these years I had thought it was Victorian tastes that had killed Dionysus in our culture. Now I find out that it was capitalists – the church, the state, the wealthy – that basically stomped on women, on reproductive rights and on the average person’s ability to feed themselves without depending on those who could make money from our hunger.

Now I know why my wife is so sensitive to the modern inequalities of women. This crap was deliberately engineered over five hundred years ago. I tell you, after getting a taste of the historical facts, I would pay a lot of money for a book that told this same story from pre-history, from the dawn of cities and agriculture. ‘Cause wow, the stuff I don’t know is still legion.